Stroke and Depression, now there’s a depressing thought. However, the reality is that depression can strike anyone, but people with serious illnesses such as stroke may be at greater risk.

An estimated 10 to 27 percent of those who experience a first or recurrent stroke each year, experience major depression.

Appropriate diagnosis and treatment of depression may bring substantial benefits to persons recovering from a stroke by improving their medical status, enhancing their quality of life, and reducing their pain and disability.

Three-fourths of strokes occur in people 65

Stroke can occur in all age groups and can happen even to fetuses still in the womb; but three-fourths of strokes occur in people 65 years of age and over, making stroke a leading cause of disability in older persons.

An estimated 10 to 27 percent of those who experience a first or recurrent stroke each year, experience major depression. An additional 15 to 40 percent experience some symptoms of depression within two months following a stroke.

The average duration of major depression in people who have suffered a stroke is just under a year. Among the factors that affect the likelihood and severity of depression following a stroke are the location of the brain lesion, previous or family history of depression, and pre-stroke social functioning.

Stroke survivors who are also depressed, particularly those with major depressive disorder, may be less compliant with rehabilitation, more irritable, and may experience personality change.

Despite the enormous advances in brain research in the past 20 years, depression often goes undiagnosed and untreated. Stroke survivors, their family members and friends, and even their physicians may misinterpret depressive symptoms as an inevitable reaction to the effects of a stroke.

However, depression is a separate illness that can and should be treated, even when a person is undergoing post-stroke rehabilitation. Although depressive symptoms may overlap with post-stroke symptoms, skilled health professionals will recognise the symptoms of depression and inquire about their duration and severity, diagnose the disorder, and suggest appropriate treatment. 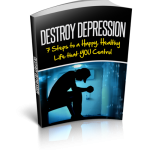 Depression is a hideous illness, and if you are suffering from it right now you might be asking the question: Can depression be cured?

Well, the answer is yes and you will find it in the Internet’s best-selling natural Depression Cure

Depression is a serious medical condition that affects thoughts, feelings, and the ability to function in everyday life. It can also occur at any age.

Depression results from abnormal functioning of the brain. The causes of depression are currently a matter of intense research. An interaction between genetic predisposition and life history appear to determine a person’s level of risk.

Episodes of depression may then be triggered by stress, difficult life events, side effects of medications, or other environmental factors. Whatever its origins, depression can limit the energy needed to keep focused on treatment for other disorders, such as a stroke.

A stroke occurs when the blood supply to part of the brain is suddenly interrupted or when a blood vessel in the brain bursts, spilling blood into the spaces surrounding brain cells. Symptoms of stroke appear suddenly and often there is more than one symptom at the same time:

Gender also plays a role in risk for stroke.

Men have a higher risk for stroke, but since men do not live as long as women, women are generally older when they have strokes and are more likely to die from them.

However, women’s hormonal changes during pregnancy, childbirth and menopause increase their risk for stroke. The risk of stroke associated with pregnancy is greatest in the postpartum period—the 6 weeks following childbirth. The risk for stroke also varies among different ethnic and racial groups.

Stroke is a Disease of the Brain, But it Can Affect the Entire Body

Although stroke is a disease of the brain, it can affect the entire body. Some of the disabilities that can result from a stroke include paralysis, cognitive deficits, speech problems, emotional difficulties, fatigue, and daily living problems.

Many people require psychological or psychiatric help after a stroke. Depression, anxiety, frustration and anger are common post-stroke disabilities. Because stroke survivors often have complex rehabilitation needs, progress and recovery are unique for each person. Although a majority of functional abilities may be restored soon after a stroke, recovery is an ongoing process.

Get Treatment for Depression

Depression can affect the mind, mood, body and behaviour. While there are many different treatments for depression, they must be carefully chosen by a trained professional based on the circumstances of the person and family.

Prescription antidepressant medications are generally well-tolerated and safe for people recovering from a stroke. There are, however, possible interactions among some medications and side effects that require careful monitoring.

Therefore, stroke survivors who develop depression, as well as people in treatment for depression who subsequently suffer a stroke, should make sure to tell any physician they visit about the full range of medications they are taking.

Specific types of psychotherapy, or “talk” therapy, also can relieve depression. Sometimes it is beneficial for family members of a stroke survivor to seek some counselling as well.

Treatment for depression in stroke survivors should be managed by a mental health professional—for example, a psychiatrist, psychologist, or clinical social worker—who is in close communication with the physician providing the post-stroke rehabilitation and treatment. This is especially important when antidepressant medication is prescribed, so that potentially harmful drug interactions can be avoided.

In some cases, a mental health professional that specialises in treating individuals with depression and co-occurring physical illnesses such as stroke may be available.

Antidepressant medications can take several weeks to work and may need to be combined with ongoing psychotherapy.

Not everyone responds to treatment in the same way. Prescriptions and dosing may need to be adjusted. No matter how severe a stroke, however, the person does not have to suffer from depression. Treatment can be effective.

Use of herbal supplements of any kind should be discussed with a physician before they are tried. Recently, scientists have discovered that St. John’s wort, an herbal remedy sold over-the-counter and promoted as a treatment for mild depression, can have harmful interactions with some other medications.

Remember, depression is a treatable disorder of the brain. Depression can be treated in addition to whatever other illnesses a person might have, including stroke. If you think you may be depressed or know someone who is, don’t lose hope. Seek help for depression.

There are many things you can do to manage Depression and / or just stay healthy:

… the combination of Vedic Meditation, for twenty minutes twice a day, with a good diet. Especially a low fat, low salt diet. And physical exercise should see a dramatic change in your health.

Vedic Meditation is one of the most powerful techniques available for reducing stress and anxiety. It is also one of the easiest to learn and simplest to practice.

If you are in Auckland (NZ) call me, Warwick Jones, on 09 419 5380. Or email to find our how Vedic Meditation could help you achieve better health.

Click here ==> to find out more about Vedic Meditation